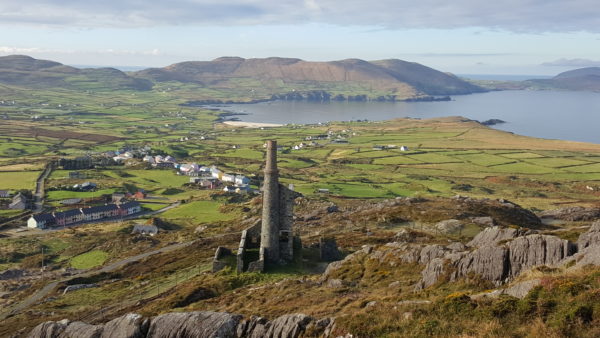 In 1812, life in Allihies changed utterly when a rich copper deposit was discovered in the area and the biggest copper mining enterprise in Ireland was established by the Puxley family which saw the Industrial Revolution spread it’s tentacles to this most remote corner of Ireland. 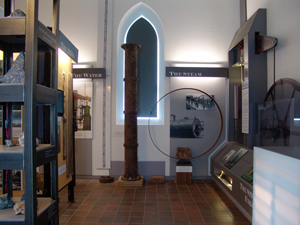 [orange]Visit Allihies Copper Mine Museum and discover this extraordinary story of exemplary engineering coupled with less than exemplary social conditions.[/orange]

The evidence of this industry is to be seen all around Allihies in the form of the large Cornish engine houses that housed the magnificent steam engines that made the mining possible, constantly pumping out water for deeper and deeper mining, driving winding gear and lowering the miners to great depths, far below sea level.

For the best part of the nineteenth century Allihies echoed with the sound of giant machinery crushing the quartz rock which held the copper ore. Dressing and separating the ore was an arduous task for man and machine and the resulting ore was shipped to Swansea for smelting.

Streams of water ran form the dressing floors down to Ballydonegan Beach passing through the huts and mud hovels that gave shelter to hundreds of Irish labourers and their families. Allihies was overcrowded, with each dwelling in the village housing at least 25 inhabitants. At the heights of it’s working the mines employed more than 1500 people. The mines eventually closed in 1884. There was a subsequent working of the mines in the 1920’s and further exploratory work from 1957 – 1962, which declared the mines to be unviable.  It proved that the nineteenth century miners had done a very thorough job.

The Copper Cafe is a bustling place in the summer. With seating indoors and outdoors our customers can savour coffee and a cake or a delicious seafood lunch and a glass of wine. Our sensory garden is an oasis of peace and tranquility where you can enjoy amazing views over the Allihies countryside and the stunning Ballydonegan Beach.
The Café offers a full lunch menu to eat in or take out. We look forward to serving you. 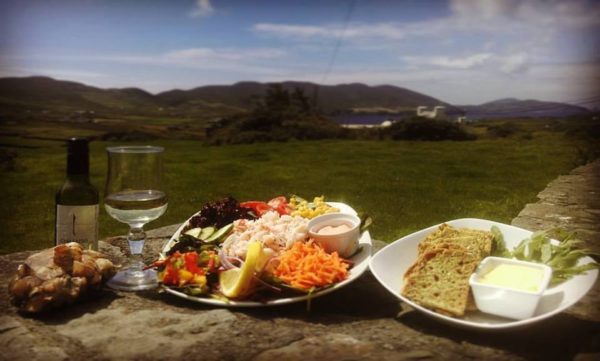 The Copper Café is available for private functions, with or without catering.  For more information email info@acmm.ie or phone 027 73218. 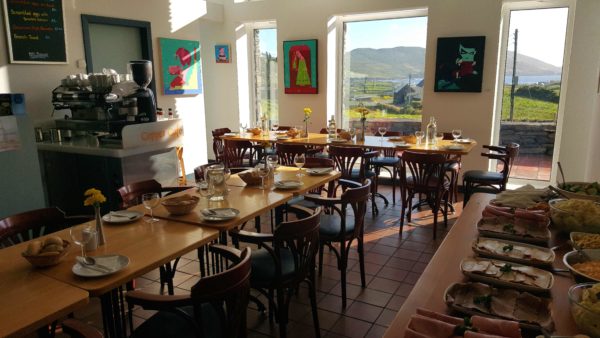 During the summer season the Cafe and Gallery walls are hung with works of art for sale highlighting local, national and international artists. Check out our facebook page for information on all our exhibitions.

We are just confirming dates and Artists for our 2021 shows.  Will publish a full list once same is available. 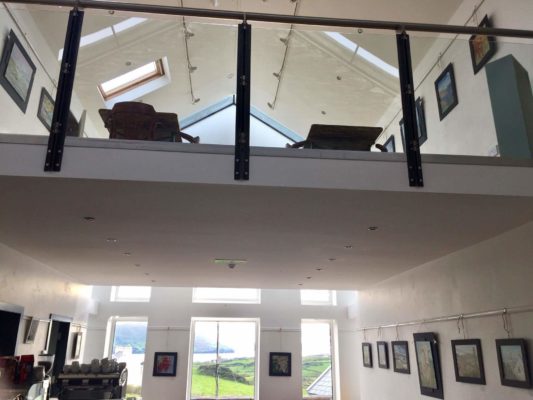 The brightly coloured village of Allihies appears as you traverse the mountain gap at Barnes. Wild and rugged, the village blossoms in the summer months.  Local accommodation fills up with longstanding and new visitors exploring the area, and  the pubs and the cafe are filled to capacity . 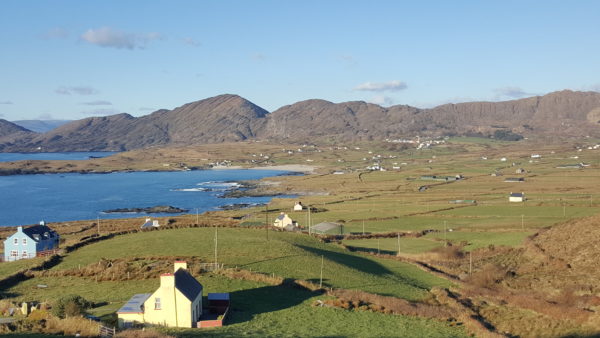 Nestled between the Sliabh Mioscais and the Atlantic seaboard, the area provides many opportunities for discovery, leisure and relaxation. The stunning natural scenery is a draw for nature enthusiasts, cyclists and walkers. Ballydonegan, with its sandy beach, is a great place to swim and sunbathe, while the more energetic can walk the copper mine trail, perhaps followed by a pint or two and the craic at one of the three local pubs. 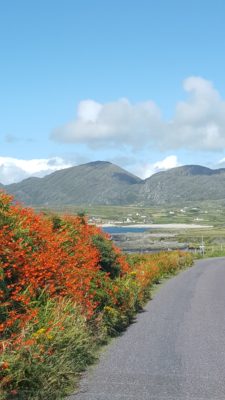 The Michael Dwyer festival, a tribute to the renowned tin-whistler, takes place every year in June and the Allihies family festival takes place every August, centred around the 15th – a week of fun for all the family! 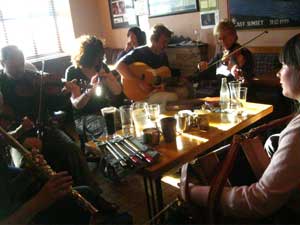