Copper mining started in Allihies in 1812 when John Puxley, a local landlord, identified the large quartz promontory at Dooneen as copper bearing from its bright Malachite staining. 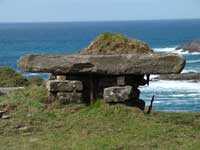 Initial mining began with a tunnel or adit driven into the quartz lode from the pebble beach below. In 1821 two shafts were sunk . Flooding was a continuousproblem and in 1823 the engine house was erected to house a steam engine brought over from Cornwall to pump water from the depths. The remains of this building with the base of the chimney can be seen across the road. There is also evidence of a steam powered stamp engine to the left of the chimney and dressing floors in front of the engine house. The high dam further inland is the remaining evidence of a water reservoir which stored the water that was pumped out from the bottom of the mine. It was used for the steam engines and needed to separate the copper from rock. All the rubble on the cliff at the sea side of the road is the crushed useless quartz rock left over after the copper ore was extracted.

This is one of six productive mines in the Allihies area and its operation continued until 1838 when it closed due to failing ore.

John Puxley died in 1860 and in 1868 his son Henry Puxley sold the mines to the new Berehaven Mining Company who reopened the mine and installed a new 22 inch steam engine in 1872. Little ore was produced though in this period and the mine was finally abandoned in 1878.

Caminches Mine opened in 1818 and ore was extracted from a 116 metres long north- northwest quartz vein extending down 400 metres. Not much remains at this site except several shafts and a few ruined walls of uncertain function. Two water driven stamping mills for crushing the rock are known to have operated here as well as two engine houses. One of these housed a 36 inch steam engine bought from the newly closed Ross Island Copper Mine at Killarney. 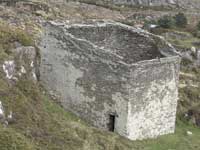 Several water wheels were employed in Allihies Mines, some as big as 30 feet high. They powered stamps on the dressing floors as well as a sawmill. Huge reservoirs were built high up in the mountains to ensure a constant supply of water to the wheels. The reservoir in Caminches valley was the largest, and in March 1833 caused a tragic accident when it burst its dam and flooded the mine trapping four men and a boy.

Mine Captain Martin described the dramatic rescue attempt in a letter to Puxley:

“(On hearing there were men trapped) Bat Murphy and John Sonish went to the windlass and drew the buckets up and down to try if the men would get hold of the rope. Two of them were brought up at once fast to the rope. At this time one man and a boy sank under the water, the boy laid hold of the man in the back part of his neck, twice he had to cast off the boy to save his own life, while in this state the rope came in his way and he laid hold of it. … The poor boy drowned.”

Ore production at this mine was erratic, reaching its peak in 1835. The mine closed about 1850. There was a brief and unsuccessful opening of the mine by the Berehaven Mining Company in 1882.

Coom Mine was the last mine to be opened in the Allihies area having been opened in 1870 by the new Berehaven Mining  Company who had recently bought the mines from Henry Puxley in 1868.

Two shafts were sunk and the engine house erected to house a 28 inch cylinder steam engine. The site was known as Bewley’s after the Dublin family who were board members of the Berehaven Mining Company.

Working in the mines was dangerous. A Mine Captain reports:

“On the 13 inst. we had a man killed by falling out of the whim bucket in the whim shaft (winding shaft), he fell 72 feet and was killed immediately. … The whim bucket was coming up and he was rather late to get into it, when he laid hold of the edge of it with his fingers and was drawn up nearly to the top in that manner but was obliged to let go at last and fell to the bottom of the shaft. … He was a very able young man – this day we intended to carry him across the mountain to Castletown a distance of 7 miles to have him interred but the weather is so bad with a fall of sleet and snow that it was not possible. … We hope to do the last for him tomorrow.”

Coom Mine proved not to be a very productive mine. It had only produced 70 or 80 tons of ore when it closed in 1882.

In 1917 a further attempt to extract ore was made by Allihies Copper Mines Ltd. which proved fruitless.

This was a very extensively worked mine which was opened in 1842. It is a continuation of the same fault as Caminches Mine. Over eighteen shafts were sunk along a 2,000 metre long by 25 metre wide north-northeast tending quartz vein.

There were at least four engine houses erected along this vein, only one of which has survived. This is known as Puxley’s, and housed a 50 inch steam engine brought from Cornwall in 1845. It was a pumping engine lifting water from the

bottom of the mine 400 meters below. This water was discharged underground into a tunnel that leads from Puxley’s engine to the stream below the graveyard in the Village.

Spread over this site at the height of its operation was an extensive complex of buildings which included a timber yard and stables as well as ore dressing floors further down the road. The quartz sand that was left over after the dressing process when all the copper ore was extracted was washed down to Ballydonegan where it made the beach that we enjoy today.

Between 1861 and 1868 there was a lot of unrest amongst the workers resulting in three strikes over pay and conditions.

After Henry Puxley sold the mines in 1868, Kealogue Mine continued to be productive for the new owners, the Berehaven Mining Company, who extracted a further 1,473 tons of ore before its final closure in 1882.

The Mountain Mine copper vein was discovered in 1813. It started as an open cast mine, following the copper bearing quartz vein, as can be seen in the huge gaping holes in front. The Miners attacked the hard quartz with hammer, chisel and gun powder. In the early years the mining was completely reliant on manpower. Buckets with ore were man-handled from the 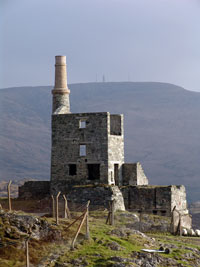 depths and hand crushing and sorting took place at the surface just beside the open cast.  Women and children took a big part in this laborious and painstaking process, the evidence of which can be seen in the resulting rubble around the site here.

The first engine house was erected in 1830, evidence of which can be seen on our left. Known as the “North Engine”, its role was to pump water from the depths to enable deeper and deeper mining.

These engine houses, which were the key to the success of this vast mining enterprise, housed the magnificent steam engines which were developed in Wales and Cornwall to serve the mining industry all over the world.

The large engine house in front of us is the “Man Engine House” which was erected in 1862 to operate the newly invented system of lowering and lifting the miners to and from the mines. This engine house is very unique, being the only man engine house in Ireland and one of only a few surviving in the world. In 2004 the Mining Heritage Trust of Ireland undertook extensive and vital conservation work on this building.

Mountain mine was the most productive mine in Allihies and from its opening in 1813 was in continuous production until 1882 when the mine closed, having reached a depth of 421 meters below surface. Approximately 280 meters of this is below sea level.